It’s official: our city has a new heart. After 8 years of planning, 15 months of construction and $50 million in funding, Cleveland Public Square was officially opened and re-dedicated on June 30. Behind these numbers were a group of individuals and organizations committed to delivering a world-class public space to residents and visitors in Cleveland.

“This took a lot of collaboration,” said Cuyahoga County Executive Armond Budish at the re-dedication ceremony. “This is a great example of people coming together – a public private partnership.” 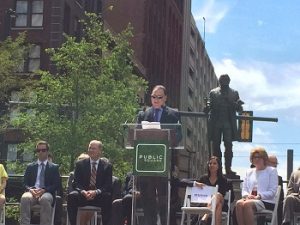 Led by the Group Plan Commission and LAND Studio, the transformation of Public Square was funded by a combination of public and private dollars contributed by organizations and citizens that call Cleveland home. The Cleveland Foundation proudly helped to launch fundraising for the project with an $8 million lead gift, announced in 2014 as a Centennial Legacy Grant honoring our 100th anniversary. 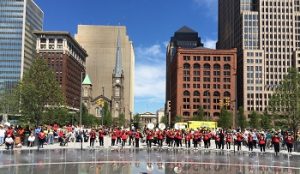 The Shaw High School Marching Band performs at the ceremony

At a time when Cleveland’s spirits are high, the opening of Public Square marked another great day for our city. In the words of Dan Walsh, “We delivered something that shows that Cleveland’s heart is beating stronger than ever.”

More in At the Foundation, Events, Grantmaking, In the Community, Strengthening Cleveland