Give Login Contact Search
At the Foundation / Grantmaking / #BehindTheGrant: Using the Power of the Law to Help Vulnerable Populations

In January, we granted $115,000 to Legal Aid Society of Cleveland to help the organization expand its legal services to community members with limited English proficiency (LEP). In this guest blog, we invite you to go behind the grant to learn more about Legal Aid Society and its work:

Imagine living everyday life as a citizen in the United States where you cannot speak the dominant language or understand it. Perhaps you are a refugee, escaping violence and persecution in your home country. Or, you are an American citizen from Puerto Rico – but Spanish is your only language. As you would imagine, there are many complications that surround the simplest of daily routines.

Now, imagine having to face legal issues related to your safety, health or economic security – and you are not able to understand a single word of the accusations against you. 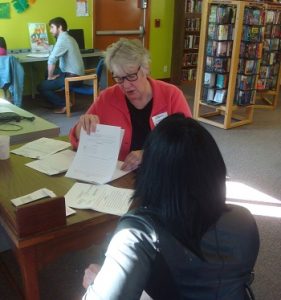 Legal Aid Society of Cleveland uses the power of the law to help those who are poor and vulnerable. In Northeast Ohio, approximately 622,000 people are low-income and eligible for Legal Aid’s services. Of those, 13% are non-English speakers – defined as those with limited or no fluency in English.

Thanks to the Cleveland Foundation, Legal Aid is increasing the health, safety, and economic stability of those with limited English proficiency through civil legal advocacy. The work happens through legal representation, community education and outreach, and broad-based advocacy – especially focused on issues related to enforcement of Title VI of the Civil Rights Act.

A legal solution is often the key to creating family stability and moving out of poverty. For instance, Legal Aid helped Raul Cerda* and his wife, who moved to the U.S. from Peru in 2012 with green cards sponsored by his mother, a U.S. citizen. Mr. Cerda and his wife moved in with his sister, Elvira Segovia. Unfortunately, living with Ms. Segovia did not work out. She became very controlling, hid their green cards “for safe keeping” and wouldn’t return them, and forced them to do work around her house. She hid their passports and demanded a $5,000 ransom. Without his green card, Mr. Cerda couldn’t renew his driver’s license and was worried about losing his job.

The Spanish American Committee helped them apply for new green cards, but their fee waiver applications were denied. They were referred to Legal Aid for help. First, their Legal Aid attorney helped the couple apply for new passports from the Peruvian Consulate. She filed the green card replacement paperwork again, this time including a year of tax returns and pay stubs to support their fee waiver request. A passport stamp temporarily proved their Legal Permanent Resident status and Mr. Cerda could get his driver’s license. Then, after all the forms were submitted and approved, it still took six nerve-wracking months of waiting to replace legal documents that had been, in effect, stolen.  Mr. Cerda and his wife now have replacement green cards and security to move into a new, safe home while keeping his job.

Cleveland’s Legal Aid is the fifth oldest in the country and one of 134 independent Legal Aid organizations serving every county in the United States. When founded in 1905, Legal Aid’s main focus was legal advocacy for health, shelter, safety and economic security for mainly Irish, German, Polish immigrants. This project takes Legal Aid back to its roots, helping vulnerable populations and in turn, helping Cleveland grow and become known as a welcoming city to all people.