Give Login Contact Search
At the Foundation / Grantmaking / Stories of Impact: A Community Builds a Stronger Future by Remembering Fallen Police Officer

Parkview Avenue, located in the east side Woodland Hills neighborhood, spans 30 blocks with no public green space and a surplus of dilapidated houses. The residential street will soon be more fit for its name thanks to a collaborative effort lead by the Cleveland Police Foundation to construct a privately-owned public park that will be open and accessible to its neighbors. Scheduled to open in October, Derek Owens Memorial Park will continue the Cleveland Police Foundation’s commitment to community policing while honoring a fallen officer.

This project goes beyond a space for fitness and community engagement. It also serves as a memorial to Derek Owens, a Cleveland Police Officer who passed away in 2008 with a gunshot wound he received in the line of duty at the abandoned lot that will soon become a park named in his honor. Keith Sulzer, Captain, Bureau of Community Policing and Liaison Officer, Cleveland Police Foundation, remembers his fellow officer, “Derek was well-loved, well-respected. He was the kind of guy who always picked people up and made everything a little better.” 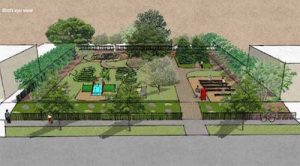 Although the Cleveland Police Foundation owns the park, Captain Sulzer says this project wouldn’t be possible without help from the community. He thanks the Cleveland Foundation, St. Luke’s Foundation and the Cleveland Browns for their monetary support, as well as the various groups and individuals who have dedicated their time and talents to the construction process. One organization lending a hand is Cement Masons Local Union 404 whose community involvement allows the union to not only support worthy causes, but also teach the community about the availability of good jobs in construction for everybody.

We asked Captain Sulzer to explain how Derek Owens Memorial Park will impact the neighborhood and what other programs the Cleveland Police Foundation supports in the 16 Eastside and Downtown neighborhoods served by the Third and Fourth Police Districts:

What is community policing?

It’s simply the community and the police working together for a common goal; whether it’s safety or helping a family who needs a home. For example, we have an officer who has throat cancer, and we went and fixed up his house so his family could sell it to have money for his health costs. It was not just the cops that did it; the whole community came together. 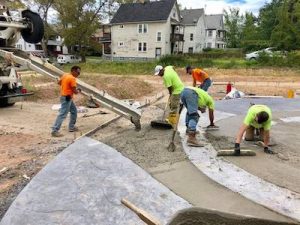 Volunteers constructing a labyrinth walkway in the park that will give residents a space to exercise and connect with neighbors.

What impact do you hope creating this public green space will have on the neighborhood?

Especially in this neighborhood where people don’t normally get out of their houses because there’s nowhere to go, they can come out and walk here. It’s good health-wise, and we’re hoping there will be more police presence here because it’s a memorial to a fallen officer. I want to create programming here where I bring kids in to teach them about Derek Owens and show them that police are their friends and we care about them.

The park will also include our tenth Little Free Library. We’ve gone through more than 5,000 books, which means the kids don’t have the books at home. That was an eyeopener to me. There’s a huge correlation between illiteracy and incarceration. 85% of kids in the juvenile justice system are illiterate. If we can promote literacy, especially at a young age, it takes off from there.

Aside from the park, what other programs has the Cleveland Police Foundation developed to increase community engagement?

We have a bicycle unit. They’re just cops on bikes, and they’re a hit. It’s not only effective for policing, but as a community relations tool. When you see cops on bikes they’re more available than if they were in a car. You can stop them and talk to them. Kids love them. The Cleveland Foundation and St. Luke’s have helped buy winter gear for those bike units, which can normally only function through around October. But with the winter gear, they can ride up until December which gives them a few extra months of connecting with the public.

We have tremendous programs other than that. We work with the County Board of Health on the Cops N Cribs program. One of our biggest issues in Cleveland is our high infant mortality rate, which isn’t because of our hospitals but because of socio-economic conditions. A lot of parents bring these infants home and don’t have safe sleep environments. If an officer goes into a home and sees a family that could use some help, I deliver a crib to them for free, and then we talk about safe sleep environments. I also bring in books for the kids to read, toys and things like that.

We do all kinds of great things like bring toys to the Metro Hospital Pediatric Unit or say if a kid gets their bike stolen, and the officer thinks the kid is really deserving, we’ll buy them a new bike. Little things like that.

Nelson Beckford, Cleveland Foundation Program Director, Neighborhood Revitalization & Engagement, explains his support of the park, “To me, Owens Memorial Park is the embodiment of the following quote by Hugh Newell Jacobsen – ‘When you look at a city, it’s like reading the hopes, aspirations and pride of everyone who built it.’ – the park celebrates the life of Officer Owens and is a visible symbol of District 4 and the Cleveland Police Foundation’s commitment to serving people and place. I am certain that this sacred space will be well-used and well-loved by the neighborhood.”

The Cleveland Foundation is proud to have supported the Cleveland Police Foundation with grants totaling $158,720. Our donors have given an additional $1,500 to the organization. Learn more about our work with neighborhoods here.