How many times a day do you rely on an internet connection? From checking the weather to paying bills, technology and internet access have become an integral part of succeeding in everyday life. While technology continues to advance – providing faster ways to access information, communicate with our loved ones and find job opportunities – a gap in access to this technology continues to grow, leaving those who cannot afford these digital necessities at a consequential disadvantage.

In Cleveland, 38% of households have no broadband and/or no computers. The Cleveland Foundation launched our Digital Excellence Initiative in 2017 to ensure all residents can successfully participate in the digital world and economy, and to elevate Greater Cleveland’s infrastructure, talent and research prominence in digital technology and innovation. 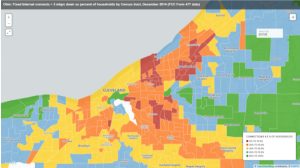 Low income, higher age and low education levels are the three main variables shown by national research to be associated with digital illiteracy and lack of internet connection. In a 2017 local study, the Cleveland Foundation identified “Digital Equity High Need Areas” in which residents are living at or below 200% of the poverty threshold and less than 40% of households have internet connectivity of 10 mbps or greater. In partnership with Cleveland Public Library, Cuyahoga County Public Library, Cleveland Metropolitan Housing Authority (CMHA), Huntington Bank, PCs for People and CHN Housing, we’ve developed the following programs to begin breaking down barriers to digital access in our community:

Connecting through Libraries: In low-income neighborhoods, public libraries tend to be the sole resource for residents to access computers and training. In October 2018, we deployed 600 4G unlimited data hotspot devices throughout all 28 Cleveland Public Library locations and 300 additional hotspots at four Cuyahoga County Public Library branches (Garfield Heights, Warrensville Heights, Maple Heights and Southeast/Bedford Heights). The devices are free to check-out and available for 21-day lending periods with no charge for connectivity. In the program’s first six months, there were more than 6,000 library hotspot checkouts.

Bringing PCs for People to Cleveland: Through electronic reuses, PCs for People provides the opportunity for all low-income individuals to benefit from the life-changing impact of computers and mobile internet. The nonprofit organization opened its third location (expanding from Minneapolis/St. Paul and Denver) in the Kinsman neighborhood to provide residents below 200% of the poverty level or enrolled in an income-based government assistance program affordable refurbished computers, in addition to receiving flat-fee tech support and repair services. In its first six months, PCs for People has sold more than 1,000 computers to Clevelanders in need. Below are statistics pertaining to CMHA residents served by PCs for People in its first six months:


Of the 1,329 residents served, 70% had no computers at home and 40% had no internet access at home at the time they set up an account with PCs for People.

The Cleveland Foundation’s Digital Excellence Initiative was recognized by the Department of Housing & Urban Development (HUD) and the Council on Foundations with a 2019 HUD Secretary Award for Public-Philanthropic Partnerships. This award commends partnerships between the philanthropic and public sectors and their impact as a community strategy to increase the quality of life for low- and moderate-income residents across all American geographies – urban, suburban and rural.

Learn how to donate your old technology to PCs for People for recycling.