When we meet to consider requests, we do so with the firm conviction that we are fulfilling the wishes of our parents, grandparents & great grandparents

Curating the Fine Art of Giving

As art collectors with an eye for impressionist masterpieces and other European art, early 20th century Clevelanders Frank Hadley Ginn and Cornelia Root Ginn enjoyed meeting with New York art dealers at their home in Gates Mills. With each purchase, they were curating Cleveland history and laying the groundwork for what would become an active and engaged local family foundation.

Both born in the mid-1800s, Cornelia’s family ran the Root Dry Goods store in downtown Cleveland. Frank was born in Clyde, Ohio, and came to Cleveland for a legal apprenticeship after attending Kenyon College. The first firm that he worked for merged with another to create Tolles, Hogsett, Ginn and Morley, a forerunner to Jones Day. In 1913, Frank was appointed managing partner, a position which he held until shortly before his death in 1938. While Frank was practicing law during a period of great prosperity in Cleveland, Cornelia was raising four children, staying active in the faith community, and, to ensure the best education for her children, maintaining a correspondence with Madame Montessori. This even led to establishing an early Montessori school in the Ginn attic.

At the time impressionism was being introduced in America, the Ginns formed a relationship with Paul Durand-Ruel, one of the first modern art dealers. He kept the family appraised of upcoming works and good prices, and dealers would visit the Ginn home to demonstrate artwork in certain settings.

In addition to their passion for art, the Ginns loved classical music. Frank was one of the founders of the Musical Arts Association, and at the request of his close friend John Severance, chaired the construction committee for Severance Hall. Frank and Cornelia also hosted “musicales” several Sundays each year in their home for orchestra members and visiting musicians. Their guest book is even signed by Maurice Ravel, who played on a piano that is still in the family.

Following their deaths in the late 1930s, Frank and Cornelia’s art collection, as well as their passion for the Cleveland community, was passed on to their four children, Francis, Marian, Alexander (Sandy) and Barbara. Over the years, several of the paintings were sold or donated, including a handful of pieces given to the Cleveland Museum of Art. One of the donated paintings, “Mother and Child,” is regarded as one of Renoir’s best pastels. 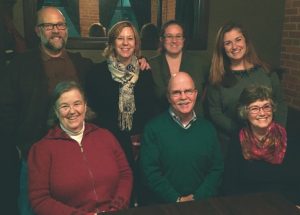 In the early ’90s, about the time that the paintings would have been passed to the third generation, Helen and Sandy’s children began encouraging their parents to auction the art for a charitable endowment. Nearly 10 years before Sandy’s passing, the paperwork was drafted to establish the Frank Hadley Ginn and Cornelia Root Ginn Charitable Trust, which would be seeded by the sale of the art.

In May 2000, the five remaining paintings were sold at auction for about $4 million, and Helen and Sandy’s children became the first charitable trustees. Over the last 17 years, the family foundation has awarded 309 grants to 99 organizations, totaling more than $2.7 million. The grants focus on the education and healthcare needs of low-income individuals, primarily in Cuyahoga County.

To apply for a grant from the The Frank Hadley Ginn & Cornelia Root Ginn Foundation, please visit our Grants Gateway.