Since 2008, more than 2,500 refugees have come to Northeast Ohio to resettle. Many have fled intense conflict in their home countries and are met with a series of obstacles – from learning a new language and customs to navigating unfamiliar employment, housing and education systems – as they try to acclimate to their new home.

“You really have to start from scratch,” according to Patrick Kearns, executive director of the Refugee Response, a Cleveland-based nonprofit organization dedicated to supporting resettled families as they grow roots in their new communities. “Imagine navigating a letter-based grading system if English isn’t your first language. What context do you have to know a ‘D’ is worse than an ‘A’?”

Established in 2010, the organization provides a unique and growing set of programs that aims to provide wrap-around services to refugee children and parents, focused primarily on education and employment.

The Refugee Response’s suite of youth mentoring programs helps connect students with the supports they need to succeed in their new school environment. Newly arriving refugee students are hit with a trifecta of adjustment challenges as they try to get their bearings academically, socially and culturally, according to Kearns. “We’re looking to create a ‘landing pad’ for kids,” Kearns said. “We provide programs that understand the cultural context they’re coming from.”

“We’re focused on graduation,” Kearns said. “We want our students to get high school behind them. Because if you don’t, it gets further and further away the older you get.” He added that the graduation rate for members of their Teen Response program is 100%, compared to a national average of 20% for refugee students. 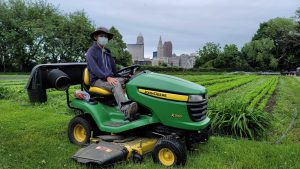 The organization also operates the Ohio City Farm, one of the largest urban farms in the United States. Operating on nearly six acres, the farm has been providing fresh, local produce to underserved Cleveland residents – as well as jobs for members of Northeast Ohio’s refugee community – since 2010. The farm employs six full-time farmers, all former refugees from Burma, Bhutan and the Congo. “It’s a great fit,” said Kearns. “Overwhelmingly, folks who come here have a strong agricultural background and it’s just a matter of plugging their talent in here and creating a successful business.”

In 2021, the farm distributed 5,326 boxes to its 250-plus member Community Supported Agriculture program and donated more than $3,600 worth of produce through the food distribution program at the May Dugan Center.

Support from the Cleveland Foundation has helped the Refugee Response build its capacity to provide a more robust range of support services and launch its Multilingual Content Creation Program, which provides educational content in more than 40 languages.

“It’s allowed us to be responsive, creative and to always be oriented toward solving problems that will move the mission forward,” Kearns said.

The organization relies on its staff of 30 and a strong network of more than 300 volunteers to serve its client base, which spans more than a dozen countries of origin.

“I like when you can see that programs and services have made an impact,” Kearns said. “That’s what motivates me.”

Those looking to support Northeast Ohio’s refugee community can start with where they shop, Kearns said. “There are a lot of restaurants and businesses that are opened by refugees in the community. Support them. Buy their food, try something new. Come to the farm stand or volunteer with our organization to be a mentor. Those things will also change your life.”

Looking for more ways to support refugees in Northeast Ohio? Learn more about the work of the Refugee Response here.