In 2018, Shaker Heights-based dance company Verb Ballets began a transnational collaboration with Havana, Cuba-based company ProDanza when both groups participated in our Creative Fusion: Cuba Edition international artist residency. Since then, Verb and ProDanza have continued their work together as The Cleveland Havana Ballet – most recently presenting a joint production of Romeo and Juliet at The Teatro Nacional de Cuba. In this guest blog, Verb dancer Kate Webb shares her perspective on the creativity and camaraderie fostered by this collaboration.


Usually when someone stabs herself and crumbles to her death, you aren’t filled with pride and camaraderie. But when the feigned suicide takes place on the stage of the Teatro Nacional de Cuba after a beautifully executed full-length ballet resulting from months of preparation and collaboration between two companies in different countries, you can’t help but feel humbled by shared gratification. The Cleveland Havana Ballet brought people together from profoundly different backgrounds to tell a timeless story of love and death. Even the tragic tale of Romeo and Juliet could not keep the dancers and directors involved in this collaboration from feeling joy over the success of the production and the partnership leading up to it. 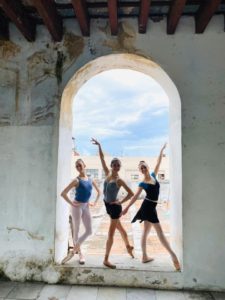 The Cleveland Havana Ballet is now in its fourth season of its unique cultural exchange. Laura Alonso, an award-winning teacher, coach and an expert répétiteur of classical ballets, directs the Havana-based professional company, ProDanza. She has traveled to Ohio every year since the inception of the Cleveland Havana Ballet to set Cuban repertory on Verb Ballets, a contemporary ballet company based in Shaker Heights. Verb Ballets toured to Cuba in 2018 to share the stage with ProDanza in the production Yarini, along with another mixed-bill repertory program. Verb just returned from its second tour to Havana on March 2.


These tours have definitely brought the two companies closer. Producing a ballet is a bit like going to war, but in the best way possible (and not just because Romeo and Juliet has several sword fighting scenes). Although each group spent time preparing individually prior to the tour week, Cleveland Havana Ballet only had four days to rehearse together in the same space before debuting the production. Like a battle, prepping for the ballet required the two groups to quickly recalibrate formations and undergo several high intensity drills to ensure everything would go according to plan when it came time to perform. No language barrier, lack of sleep, illness or injury could get in the way of the final attack. Only, instead of working together under pressurized conditions to incite violence, the mission was to incite beauty. Together, the artists accomplished that mission. But perhaps the greatest victory was learning the other dancers’ strengths and vulnerabilities, enabling the company to collectively grow and lift each other up along the way.


These turbulent times make it feel like this is not the optimal moment for crossing borders and opening up neighborhoods. But the sentiment was clear between both groups of artists that cultivating connections through periods of uncertainty is vital to the survival of communities—in Havana, in Cleveland, and around the globe. For a production with so much bloodshed, Cleveland Havana Ballet’s Romeo and Juliet definitely brought solidarity between two groups of artists, but more importantly, between two groups of people. Maybe this classic Shakespearean story doesn’t have such a tragic ending after all!

More in Arts & Culture, At the Foundation, Creative Fusion, In the Community